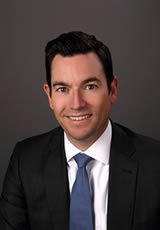 Jack Kiley was born and raised in Shelbyville, Illinois. He graduated from the University of Illinois in Urbana-Champaign before moving to Chicago for an internship with the Chicago Blackhawks. While in Chicago, Jack attended DePaul University College of Law.

Jack is admitted to practice in the Illinois state and federal courts. Jack became a shareholder at Erickson, Davis, Murphy, Johnson & Walsh in 2010. His practice is primarily dedicated to representing parties in a number of litigated areas ranging from personal injury, property damage, negligence, premises/products liability, labor/employment disputes, discrimination claims, special education matters, and subrogation claims. He also dedicates a significant amount of his practice to counseling individuals, businesses and local governmental bodies in a number of legal areas. Jack is also a trained mediator.

Jack is presently a member of the Illinois State Bar Association Assembly.